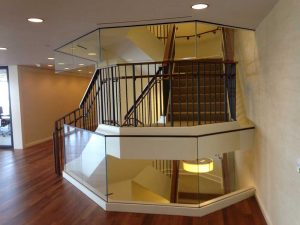 A smoke baffle is a substantial, noncombustible curtain that is hung tightly against a ceiling. Smoke baffles cordon off sections of a large ceiling for fire prevention purposes. A smoke baffle acts as a partition and “corrals” heat and smoke in the event of a fire within the curtained area. The depth of the heat and smoke contained within the curtained area can affect how quickly sprinklers are activated.

Ideally, smoke baffles work in conjunction with vents in the ceiling that pull the smoke out of the building and prevent the spread of fire. Research has shown that the operation of vents is conversely affected if smoke baffles aren’t present. Such systems are intended to maintain a tenable environment until building occupants are able to evacuate in the case of a fire.

Smoke baffles are also known as “draft stops,” “draft curtains” and “curtain boards.” They are generally required by code where moving stairways, staircases or similar floor openings are unenclosed. Pennsylvania fire codes call for “smoke barrier” construction that can withstand a minimum of 1 hour in fire.

Draft curtains are typically used at stair locations and surround the opening to the level above. The purpose is to limit the spread of smoke during a fire and to allow adequate egress, also known as evacuation, as well.